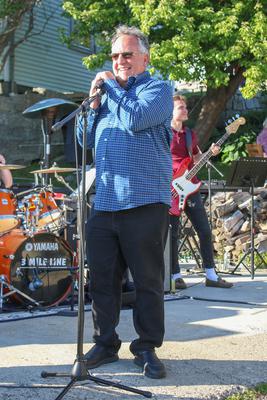 The man of the hour is speechless—for once. Jimmy Cook did thank the crowd of more than 100 people who showed up to celebrate his retirement from UPS at Fin and Fern on June 4.

Jimmy Cook celebrated his retirement with a big, loud party at Fin & Fern on June 4 after delivering packages for UPS to the island over the last 11 years.

Cook won many friends on the island with his smile, his wit and his dog biscuits. So many, in fact, that he will serve as the grand marshal for the island’s Fourth of July parade.

At least a hundred people attended his party, which featured a large tent and the band 3 Mile Line. Two of Cook’s rivals from the U.S. Postal Service, Jennifer Moody and Stephanie Black, considered mooning him at the end of the festivities but thought better of it.

Fin & Fern owner Andy Chappell interrupted the band’s play to congratulate Cook and ask him to say a few words.

For once, Jimmy Cook was practically speechless.