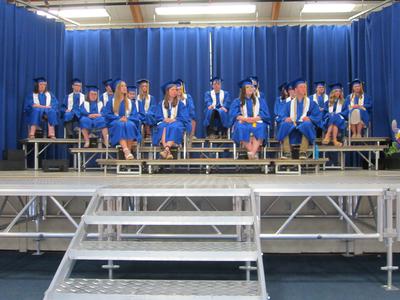 With the sunlit warm air wafting through the open gym doors, 20 students marched in for their graduation ceremony on Sunday, June 12. Class marshals Brooklyn Jones and Grace McGuire, respectively, led and followed the class.

During the more than 90-minute ceremony, the students, assembled family members, guests, community members and school faculty heard remarks about the specialness of the Island community along with gratitude for all the support that students have been given.

The theme of gratitude was kicked off by Interim School Union 76 Superintendent Mark Hurvitt, filling in for Principal Laura Davis, who was dealing with COVID issues. Hurvitt was previously principal of the Deer Isle-Stonington Elementary School and recently retired from the Blue Hill-based School Union 93 superintendent’s position he held for 15 years. In his welcoming remarks, Hurvitt praised the “sense of community” on the island, saying, “You are all lucky.”

The focus on gratitude continued through the speeches by the honor part honorees.

Second Honor Essayist Luna Perry-St. Peter, who transferred to DISHS from George Stevens Academy, praised and expressed gratitude for all the support she received from the school and Island community.

Anwen Hudson, First Honor Essayist, lauded the “embodiment of resilience” demonstrated by her classmates during the best and worst of times during their school years. Anwen told of how her class banded together with a common cause to make “the school better.” Thanking the community, she singled out, as had the prior speaker, retiring teacher Rhonda Turner for special praise and gratitude.

Salutatorian Taylor Staples spoke in gratitude about how parents, classmates, families, the school and the community had all come forward to help the class pursue their individual and collective goals.

Henry Penford, speaking as Valedictorian, told of his steady flow of good memories from his 13 years in the Island school system. He singled out his time on the championship chess teams under the leadership of Coach Dick Powell and his participation in the theater program and sports. He thanked the school staff for all they have given him and his classmates over the years.

The ceremony concluded with the formal presentation of diplomas by Hurvitt, with advisors Terry Siebert and Rhonda Turner making the formal handouts.

The graduates then left to be greeted by hugs from family members and to pose for pictures. 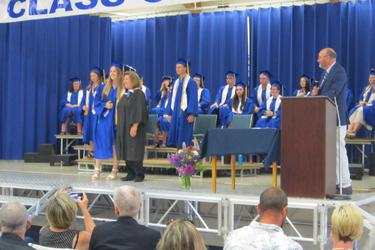 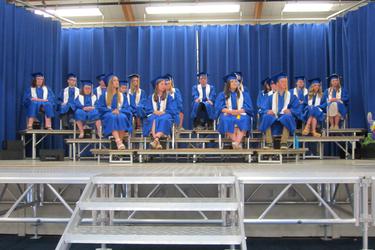 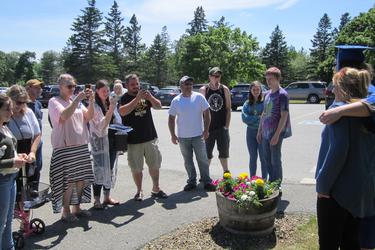 The weather cooperated for the post-graduation ritual of picture taking outside. 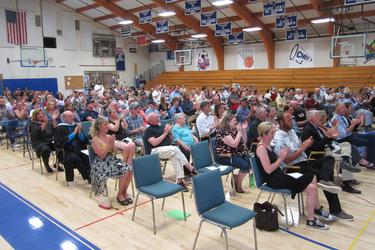 The appreciative crowd at the high school graduation.