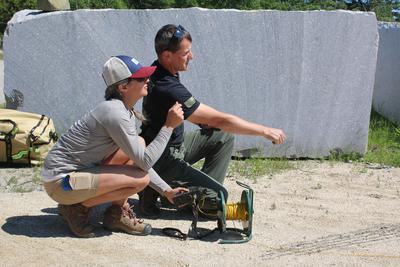 Amanda Sparks gets to push the detonator button since she found the dynamite. Trooper David Barnard first shouts “Fire in the Hole” three times, and then ka-boom.

What Amanda Sparks thought was an old pie tin under dead leaves at the former Old Quarry campground turned out to be dynamite that required a visit from the bomb squad.

It all started on Monday, June 20, when Sparks and Jamie Enos were raking leaves near a trail. They work as property managers for the family that owns the old campground.

Sparks saw a piece of metal sticking out of the ground, she said. She picked up what turned out to be a dirt-covered metal bucket, and the dynamite fell out, she said.

Enos said the 15 or 16 sticks of dynamite looked like petrified hot dogs.

They put the dynamite in a red plastic bucket. Sparks said she wasn’t nervous about handling it. “Turns out I should have been,” she said.

Sparks did a Google search to find out what they’d found.

Sparks then called Town Manager Kathleen Billings on June 21 and said, “I’ve got a weird one for you.”

It took the state police several hours to arrive. Meanwhile, five firefighters from Stonington and Deer Isle rushed to the scene. The first thing they did was to pour base oil over the dynamite—the proper treatment for it.

Hayward said they’d learned to do that just that day. “It’s not something you get trained on,” he said.

The firefighters then guarded the dynamite until the state police arrived.

When Trooper David Barnard arrived from Augusta with two bomb squad colleagues, he decided to burn the dynamite—but to hold a “training and public relations exercise,” as well. The sound produced by detonation wire and a blasting cap was a noisy reward for the firefighters who had watched the dynamite for more than four hours.

Barnard said Sparks could push the button since she found the explosives. As Enos and the firefighters stood by, Barnard yelled, “Fire in the hole” three times. Sparks then pushed the detonator button, producing an ear-piercing result.

“We should hire these guys for the Fourth of July,” Hayward said.

He explained that there were no caps involved. “If there were, you’d be evacuated a long way away,” he said.