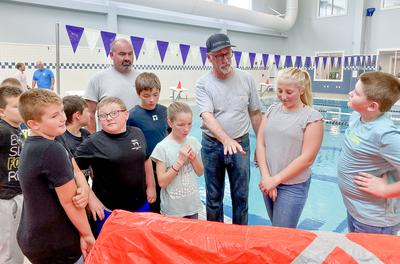 On May 26, a group of 10 middle schoolers gathered for a U.S. Coast Guard-certified drill conductor training session at the Blue Hill YMCA/Lawrence Fitness Center. The kids, whose ages ranged from 9 to 13, are all residents of Deer Isle or Stonington and have student lobster licenses. (The minimum age for a student lobster and crab fishing license is 8).

The training session started in a classroom on Wednesday, where the kids learned about fire extinguishers, flares and other safety measures, before moving poolside Thursday. This training is unique in that it is “one of the only programs in Maine to target middle school aged lobstermen,” said Matt Montgomery, branch executive of the YMCA, in an email.

The session was a collaboration among four organizations: Maine Center for Coastal Fisheries, Island Fishermen’s Wives Association, McMillan Offshore Survival and the YMCA. Hands-on instruction was provided by Tom Duym, education specialist for MCCF and John McMillan, founder of MOST.

This past January, IFWA member Suzy Shepard had the idea for water safety training aimed at young people. “This is a program that I came up with when I was thinking about my kids on the water and how I didn’t feel like I was going to be much good if something happened,” said Shepard.

She asked her son Patrick, a fishery specialist who works with MCCF, what he thought of the idea. His response: “I think you’re on to something there, Mom.” Suzy and Patrick got together with Duym, who pulled in McMillan, and things got off the ground. When Duym suggested they start with kids who already had their licenses, Shepard started calling parents to gauge interest.

“Suzy had 10 kids signed up right off the bat, within 24 hours. There was definitely a need for it,” said Duym.

“We’re hoping to make this an annual or biannual thing. We’re hoping to add on a basic first aid class with CPR, too,” said Shepard. Of the collaborative effort, Shepard expressed gratitude. “They need us, we need them…This is a very proud day. It really is.”

As the kids navigated the waters in red survival suits (shouts of “It’s very hard to move!” and “It’s extremely hard to hear!” echoed from the pool), Duym and McMillan paddled between them, getting them acclimated and helping inflate head pillows.

Meanwhile, families looked on, photographing and videoing. Ronnie and Sandy Oliver, life-long Deer Isle residents, had four grandchildren participating. “They all want to do it. They go out all summer long,” said Sandy of the kids pulling lobster traps. The Olivers’ son is a lobsterman and both of their daughters are married to lobstermen. “It’s the way life should be. Like the sign says,” said Ronnie with a chuckle.

Both Duym and McMillan were happy with the results of the four-hour day. “I think it went well. Better than expected…Overall its a really good eye-opener for the kids,” said Duym. He added that what impressed him most was the parental support. “There were some fathers who took the day off fishing to come. That doesn’t happen all the time. They thought it was important enough to see their child go through it.”

By the end of the afternoon, the kids could get into their survival suits in under a minute, knew how to access and use a life raft and had practiced numerous in-water safety drills.

“These little kids come up and thank me—that tells me they got something out of it,” said McMillan.

For her part, Shepard was thrilled. “I could not be any prouder of those kids. They did an awesome job…We’re all on a big high today.” 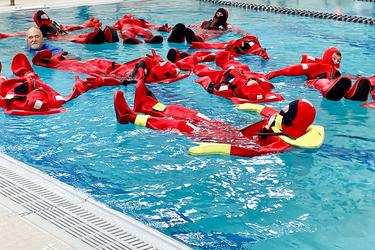 John McMillan, founder of MOST, swims among middle school safety trainees at the YMCA on May 26. 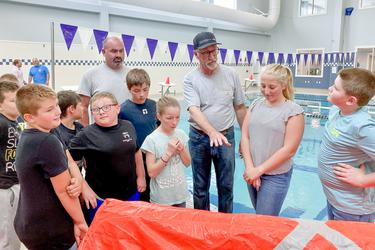 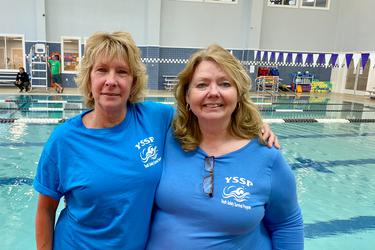 IFWA member Debbie Robbins, left, and Suzy Shepard stand in front of the pool where middle school lobstermen training took place on May 26. 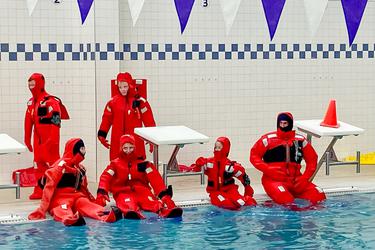 Middle schoolers prepare to enter the pool in survival suits at lobstermen safety training session on May 26.