Bailey Bowden addresses the crowd before the start of the film.

Each year, fat little fish called alewives return home to the streams and ponds of Maine where their lives began.

On Saturday, May 21, local filmmaker Tate Yoder returned home to Penobscot Community School for the premier of his film about those fish and the people who care about them.

That many care was evident from the turnout for the event Saturday. More than 70 people were on hand to see the 40-minute film, A Watershed Moment: A Story about People, Fish and the Water that Connects Them.

Yoder’s movie details the years-long effort of organizations and people coming together to reestablish the historic runs of anadromous river herring in the Bagaduce River.

Opening streams for the fish to return is vital, be it by building a fish ladder or poking holes in beaver dams, all of which take money and labor.

Many have come together to provide both, and the evidence of their success is in local streams today. May is the month when migration really gets going for adult fish returning to Wight’s Pond, Pierce Pond and others.

It was no accident that the film premiered on World Fish Migration Day, May 21.

Yoder is a media specialist for the Maine Center for Coastal Fisheries in Stonington. MCCF sponsored the film and has been intimately involved in the alewife restoration efforts. Maine Coast Heritage Trust also sponsored the film.

But, according to Yoder, many different people and organizations are responsible for the return of the fish that the Passamaquoddy people call “the fish that feed all.”

That became clear on Saturday in the school gym when people representing the town of Penobscot, MCCF, MCHT and the National Oceanic and Atmospheric Administration all spoke before the film began.

In many ways, the movie about restoring connectivity to the watershed is also about how all the “voices,” as Yoder calls them, come together in one story featuring a humble but important fish.

Yoder hails from Penobscot. He graduated from Penobscot Community School in 2011 and George Stevens Academy in 2015. His parents, Ted and Michelle Yoder, still live in Penobscot.

He received his degree in New Media from the University of Maine in 2020, which is when he started as an intern at MCCF. He was hired full time in 2021.

Yoder had some experience in the for-profit world, as well as that of nonprofits like MCCF. His technical interests were initially photography related, especially time-lapse photography and short videos.

But longer formats, like movies, allow fuller, more detailed stories to be told, he said. At MCCF, Yoder thinks of telling the stories of stakeholders, like local fishermen.

One of those is Bailey Bowden of Penobscot, who has played and continues to play an integral part in the restoration efforts and appears in the movie.

It was Yoder’s second day on the job at MCCF. He said they were out stocking fish and interviewing people like Bowden in order to create a short video for schools.

“Then we all realized there is a much bigger story going on,” he said. By which he meant, the collaborative efforts themselves between fishing interests, conservation interests, town interests, state interests and federal interests.

That marked the birth of the film that premiered on Saturday, two years later.

Yoder described the many brainstorming sessions in the fall of 2020 as the film’s outlines became clearer.

Mike Thalhauser of MCCF, Ciona Ulbrich of MCHT, Bowden and many others, including Kathy and Gunner Lymburner, all contributed.

The hive mind settled on telling a story that connected the different voices—the historical and cultural, the economic, the ecological and the spiritual—Yoder said in an interview.

It was extremely pleasing to learn that “folks care about digging deep” into issues, he said.

Nevertheless, the biggest challenge of making the film was weaving all the voices together, said Yoder. “There are so many voices, it took a while to find a way to [effectively] weave them all together. Ultimately they are all connected.”

He sees more movie projects in the future. “There are so many issues to be solved. I see a lot of potential to explore more stories in line with the mission of MCCF.”

Saturday was a first, the premier of the film. More in-person screenings at places like The Grand in Ellsworth or the Alamo in Bucksport or the Opera House in Stonington are being arranged, Yoder said.

An online release date is set for June 10. Details for viewing can be found at the websites of MCHT and MCCF.

As he was making preparations to show the film at the Penobscot school, Yoder said he recognized familiar faces, and they even recognized him 10 years later.

The Penobscot native said a most satisfying moment came on Saturday night. When the lights were turned down and all the work was done, he could watch the reactions of others. “It was priceless.” 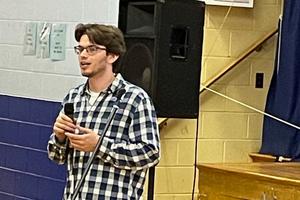 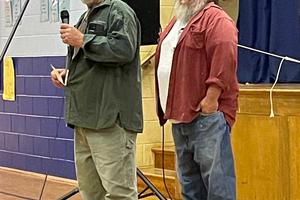 Harold Hatch, chair of the Penobscot select board, speaks on movie night. 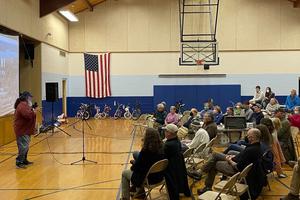 Bailey Bowden addresses the crowd before the start of the film.