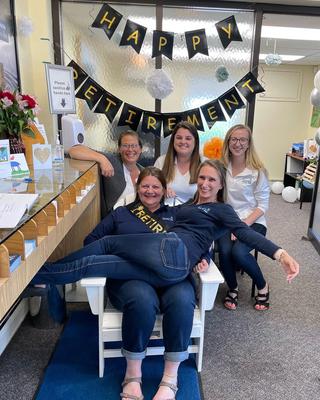 After 39 years, Sherry Rochefort retired in June 2022 from her extensive career in banking, where she enjoyed “really rewarding” work.

“I felt like it was time for me to give the reins over to someone else,” she said.

However, Rochefort’s career in banking wasn’t her first intention. After growing up in Stonington and graduating from the newly combined Deer Isle-Stonington High School, she attended Westbrook College in Portland (now the University of New England), and studied to be an executive secretary.

Despite being on the dean’s list and having a great résumé, Rochefort had a hard time landing a secretary position. “I went on several interviews for a job, but everybody wanted someone with experience, of course,” she said.

With impending student loan payments soon due, Rochefort returned to the Island. She learned about an opening at Union Trust Bank (now Camden National Bank) as a teller in Stonington. In 1983, when she went in for an interview, she was hired on the spot.

A series of promotions took Rochefort to the Blue Hill branch as head teller in 1992. There she met a UPS driver, Don Rochefort, who later became her husband. In 1997, she became manager of the Castine branch. After a few years there, Rochefort decided to change institutions and joined Bangor Savings in Brewer while living in Hampden for seven years.

Then, one day in 2004, Rochefort got a call from the human resources representative at Union Trust, asking her to come back to the Stonington branch. So Rochefort returned to the place she began her career—this time as bank manager. She held the position until her retirement in June 2022, when she felt ready to give up the many responsibilities of being a bank manager.

“It’s not just doing loans. It’s managing your people. Making sure your branch is up to code for audits. There is a lot to being a manager in a small town and in a small banking center like that,” she said.

A big throughline of Rochefort’s career was assisting all kinds of people through life’s biggest moments. “I’m all about helping people. I’m a caregiver. I like to have people succeed in their business,” she said.

She often helped people work with mortgage officers to purchase homes or get loans for their businesses, especially lobstermen.

“Getting a lobsterman coming in, you know, scared out of his pants to ask for a loan and getting to help him out and get his lobster boat. Those are the things that are really rewarding.”

Rochefort’s family goes back over 100 years on Deer Isle. Her dad was born and raised on the island, and her mother was born on Swan’s Island and grew up on Sand Beach Road. Her parents then raised her and her siblings in the family house across from Sand Beach.

There weren’t many other kids on Sand Beach Road, so Rochefort spent time with “older people” in the neighborhood. “They taught me things about cooking and things like that. I just liked hanging out with them,” she said.

Rochefort used what she learned to help out her own family and “take care of the household,” while her parents were busy working. Her dad delivered oil around the island and lobstered, and her mother was a cook at Bridge End restaurant on Little Deer Isle.

“I had to do my things before I could go out with my friends. But I don’t regret a minute of it,” she said.

When Rochefort wasn’t helping her family, she spent a lot of time at Sand Beach. She said she went every day to jump off the wharf. “We would spend hours and hours down there.”

She also remembers often driving her neighbor’s old Chevy Impala around the roads in the woods. One day in particular, the brakes didn’t work, and she and a friend got stuck on a ledge. Luckily, a neighbor came down and pushed them off.

Rochefort now lives on the same land that she grew up on. And, while the beauty has remained the same, the quietude is gone. “The charm is a little bit gone because there are so many people in the summer all the time,” she said.

It’s a huge contrast to when Rochefort was a young girl. Then, Sand Beach Road was quiet.

“I would sit at the end of the driveway and pray a car would go by so I could wave to someone,” she said. “And today, we might as well be on Route 15 because there’s so much traffic. “

The huge increase in traffic is one of the biggest and saddest changes that she has noticed, which she notes goes along with the changes in the real estate market and dwindling year-round households.

“The lack of housing for people that have been born and brought up here and would like to stay, there’s just not a lot to offer them,” Rochefort said, thinking about her nieces and nephews, hoping that they will be able to stay if they want to.

“My dad always said that we were going to be a small Bar Harbor. And he was right,” she said. “As the years went by, more and more people would come here. He had the feeling it was going to be this way. And he really hit the nail on the head.”

Only three days after her retirement from nearly four decades in banking, Rochefort started a new job at the shop Leaf and Anna in Brooklin.

In her free time, Rochefort is also a prolific knitter. “I knit tons of socks. Socks are a no-brainer. I don’t need a pattern. I just take my needles and my yarn wherever I go,” she said.

Her creations also include sweaters, hats and blankets, most of which she gives away, as she did at Camden National Bank’s Winter Fest table.

“The bank would have a table, we’d do popcorn and do the hats and mittens. Anyone that wanted one could have one,” she said.

Since retiring from banking, Rochefort has also been able to hang out more with her loved ones, like her best friend, husband and 12-year-old sibling cats, Lloyd and Lola. And, she’ll continue to take sunset photos of her “favorite place in the world,” Sand Beach.

“I just love the beauty. I love to see the four seasons. I just wouldn’t really want to live anywhere else.”