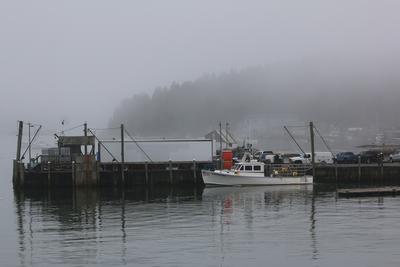 Stonington’s working waterfront may not be working for long because of Federal District Judge James Boasberg’s ruling on September 8, town officals fear.

The lobster industry and Maine’s coastal towns face dire consequences from a federal judge’s decision to order much more stringent whale rules in the near future, say lobstermen, their allies and their community leaders.

District Court Judge James Boasberg ruled on September 8 that there’s no merit to the Maine Lobstermen’s Association’s (MLA) challenge to the federal whale rules issued August 31, 2021. At the same time, he sided with the Conservation Law Foundation, which demanded a drastic reduction in the risk to right whales—in other words, the elimination of rope fishing.

“This case has reached its terminus,” Boasberg wrote.

Impact of the decision

What Boasberg’s decision means, said McCarron, is that NMFS will almost immediately issue a new rule that reduces risk by 90 percent. Pretty soon, she said, another rule will reduce risk by 98 percent.

“This is going to be very devastating for the industry,” she said in a phone interview.

It will also be devastating for Maine’s coastal towns. On Deer Isle, for example, Stonington Town Manager Kathleen Billings said it amounted to the elimination of 350 small island businesses.

“It’s killing our community,” she said at the September 12 select board meeting. “We’re going to end up losing our schools, our stores,” she said.

Billings said that summer people won’t be able to get a plumber or carpenter to work on their house because tradespeople will move away.

“They’re not going to see Maine the way it was,” she said. “It’s going to be T-shirts and taffy shops. If they think environmentally they’ve saved anything, they haven’t.”

Linda Nelson, Stonington’s economic development director, said something else is “crappy” about the whale rules. “Those whales are gone anyway,” she said. “Now they’re going to kill the communities on the coast as well as the whales.”

To what extent the red-listing of lobster will actually affect sales is hard to tell, said Travis Fifield, a Stonington lobster dealer. “Right now, it’s yet to be seen,” he said in a phone interview.

Another rating organization, the Marine Stewardship Council, continues to classify lobster as “sustainable,” according to its website.

How the Monterey Bay Aquarium reached its decision is hard to tell. On its website, it makes claims to “an eight-step scientific process” and consultations with “scientific, government, industry and conservation experts.” But at press time the aquarium did not respond to questions about the scientific process or the people consulted.

The aquarium claims it champions solutions that “help communities thrive” on its 2020 federal tax return.

See the full text of a letter to the Monterey Bay Aquarium from Senators Collins and King, Representatives Golden and Pingree and Governor Mills in the Another View column on page 5 in this issue.

“The fishermen are just getting labeled when it’s not even our fault,” said Ginny Olson, political liaison for the Maine Lobstering Union (MLU), an intervenor in the case. MLA, MLU and others representing the industry say NMFS is wrong to claim right whales swim in the Gulf of Maine. They also argue the rule won’t save right whales because there hasn’t been an entanglement in Maine fishing gear for 18 years.

Those arguments fell on deaf ears.

Boasberg dismissed every one of the lobster industry’s claims. In his decision, he sided with NMFS’s claims because they were peer reviewed.

“It was a losing fight from the get-go,” Steed said.

In his written decision, Boasberg peppered dense legal jargon with dozens of folksy metaphors such as, “The lobstermen again pull up an empty trap.” Billings, at the same select board meeting, said she found Boasberg’s language condescending and offensive.

Now the federal government and the lobster industry have until late October to file their proposed solutions, McCarron said.

The judge will then issue his order, she said. It’s possible he could close the fishery to motivate NMFS to get moving on the final rule, she said. “It’s a very strong concern,” she said. Or he could give NMFS time to come up with a rule, she said.

On the one hand, the agency has said it wants the lobster fishery to continue to operate. On the other hand, she said, NMFS has said buoy lines need to come out of the water. That likely means fewer traps.

“The industry has done everything the fleet can possibly do without taking traps out of the water,” McCarron said. Realistically, she said, reducing the number of allowable traps is the only tool the industry has.

In addition, she said, “we know for sure something will happen before the briefs are filed.”

Should the judge order a closure of the federal fishery, the inshore waters regulated by the state—three miles out—will get very, very crowded, Fifield said.

On the day Boasberg issued his decision, NMFS told lobster industry representatives they had until September 13—just two business days—to propose a plan to reduce the risk to the right whale.

NMFS’s unrealistic deadline generated a letter to the agency and a press release from Maine’s congressional delegation.

“This approach will also undermine stakeholder faith in the process and may ultimately yield a new regulatory framework that does not provide additional protections for right whales while potentially shutting down the entire lobster industry,” wrote the members of Congress.

Further, NMFS wouldn’t let the state of Maine use the agency’s computerized modeling tool to come up with a plan.

McCarron said that the state of Maine uses the tool when it works with the fishing industry to figure out how to maximize whale-protection measures while minimizing the cost to lobstermen. For example, the tool might show that reducing the number of traps by 30 percent gets the desired 90 percent risk reduction. Without it, the state and the industry might have to come up with a more conservative proposal that costs lobstermen more, she said.

Boasberg’s decision is potentially so damaging to the town of Stonington that the select board held a special meeting on September 12 to discuss it.

Fifield, a selectman, suggested it’s time to think about adapting to the new reality by moving forward with ropeless fishing. Many fishermen dismiss the infant technology as expensive and unproven.

“You can fish with their approved ropeless gear which will cost more than your boat,” Larrabee said.

“It’s a terrrible situation and there are a lot of unknowns and a lot can go wrong, but I try to stay positive there’s a small way forward,” Fifield said.

He has invited ropeless fishing developers to his wharf to demonstrate the technology. There are several versions. They involve a remote retrieval system that triggers the release of a buoy, allowing a trap to rise to the water’s surface.

However, the companies that make ropeless fishing gear are very young, Fifield said. “They’re not like a factory shooting them out,” he said.

Fifield suggested lobbying Congress and the governor to speed the development and manufacture of ropeless fishing gear.

In Canada, he said, fishermen can apply for a subsidy to buy new equipment. “All we have is letters from the governor saying, ‘This is terrible,’” he said.

Fifield said the federal government could give up an F-15 and pay for new lobster gear instead.

“One less fighter jet and you could transform the whole damn thing,” he said.

Billings, however, said the lobster industry needs more time to adapt. “We don’t have those years that you can perfect the gear,” she said. “We’ve got to do a lot of outreach, some PR. Nobody wants to kill any whales here, there aren’t any out here, anyway.”