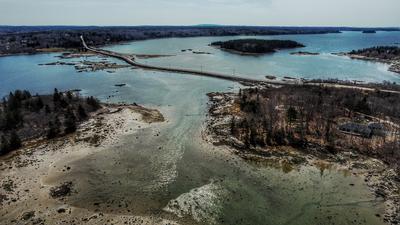 At a September 20 public meeting, Island residents learned that it’s no longer a matter of “if” the Deer Isle Causeway is knocked out of commission by a severe storm, but a matter of “when.” Unfortunately, emergency planners added, securing the funds to make the narrow connector more resilient to the effects of climate change remains a very big “if.”

But that’s all the more reason, said Deer Isle Town Manager Jim Fisher, to begin planning today. And judging from the turnout, nearly 100 residents, emergency planners, local politicians and representatives of the state’s Congressional delegation are ready to roll up their sleeves and get started.

According to the International Panel on Climate Change, the global mean sea level is rising and accelerating as glaciers and ice sheets melt in response to rising temperatures. Changes in both atmospheric and ocean temperatures are also driving new weather dynamics that lead to more frequent and intense storms, the IPCC reports.

Town officials from both Deer Isle and Stonington say higher tides, stronger winds and other storm effects have already resulted in delays and closures on the causeway and the Deer Isle-Sedgwick Bridge, but more dramatic impacts may be in store.

“What would happen if the causeway were to blow out in a storm?” asked Andrew Sankey, director of the Hancock County Emergency Management Agency, in his opening remarks. “It’s a huge vulnerability. It could become a monthly issue with the high tides. And it could become a daily issue…if sea levels continue to rise.”

Planning for the worst

Sankey was part of a 30-member team that completed a tabletop exercise a week earlier to determine the impacts of a storm-related causeway closure. Based on both historic data and realistic projections of future storms from the National Weather Service office in Caribou, the exercise determined that such an event was capable of creating a 30-foot by 30-foot, 3-foot deep hole that could shut down traffic between the island and mainland for 48 to 72 hours.

While the causeway could be repaired temporarily to permit high priority traffic to pass, permanent replacement or restoration could take many months to complete, throttling Deer Isle’s commerce, seasonal tourism and year-round commuting workforce.

“I don’t want to scare anyone,” Sankey said, “but is that a potential outcome? It certainly is.”

The question for the public hearing was how such a closure would impact Island residents as they sought to work, to transport goods to market, to ensure their loved ones could access healthcare and to keep themselves warm in the middle of winter.

Because the causeway is the only roadway that connects Deer Isle to the Deer Isle-Sedgwick Bridge and the mainland beyond, it represents a critical piece of infrastructure with local, regional and statewide significance, Sankey said. “The causeway is at the top of our list for risks in Hancock County,” he said. “In every five-year cycle I’ve been a part of, it remains the top-rated risk in our assessment.”

Island resident Linda Allen asked if the Maine Department of Transportation already had a remediation plan in place.

Dale Doughty, director of planning for the DOT, said that while the department had plans in place to respond to an emergency, it was currently working on in-depth evaluations of the causeway to generate long-term solutions and alternatives by next spring, when the next round of state and federal funding for transportation projects opened up. He said an important part of grant applications would make clear the very specific impacts to the communities if the causeway incurred significant damage. While emergency responders and planners could provide generalities, he said, only residents could realistically describe the hardships they would face.

Impacts would be severe

Stonington’s Economic Development Director, Linda Nelson, stepped into the breach with a slide that highlighted her general areas of concern. While the causeway and the bridge are vulnerable to severe storms, she said, “what’s also vulnerable is our economy.” She pointed out that the Stonington lobster fishery represents a $55 million industry, and its seven buying stations and dependency on trucking a highly perishable catch made any closure potentially catastrophic.

She also said the bridge and causeway carry an average of 4,130 vehicles per day, including 18-wheelers and small trucks that enable local businesses to ship and receive goods.

Stonington Town Manager Kathleen Billings added that for the past two summers, her town has had to truck water in to meet demand. “That’s 7,200 gallons of water, four trips a day.” When you add in trucks for lobster, diesel fuel and other essential products, any limitation on traffic could have severe consequences. “It’s better for us to be proactive,” she said. “The biggest kick in the ass we’d get is weight limits. If we get weight limits on that bridge, we’re dead in the water.”

The question on the mind of many residents was funding. Replacing either the causeway or the bridge will cost far more money than the local communities can afford, and many asked officials if state and federal funds would be available.

Doughty said that the 2021 Bipartisan Infrastructure Law “was a game-changer” when it came to transportation projects. While limited funding in the past resulted in a “MacGyver” approach that prioritized workarounds and life-extending Band-Aids, the new legislation will fund significant projects. “We have the opportunity to do some transformative things,” he said.

Nelson, in her presentation, warned the group that the project’s heavy lifting was likely to precede construction. “When they built the bridge in 1939, it took them two years to complete it,” she said. But before the first hammer was swung, it took more than 10 years to secure funding and persuade state and federal officials that the bridge had merit.

“Our major industry is under siege,” agreed Stonington resident Craig Hutchinson. “We need to get on the list. We need to have a plan. The engineering folks seem to be on our side, but it is very important to be on the screen of our state and local governments. We need to see the big picture on this, and we need to make some noise.”

One funding suggestion came from Marsden Brewer, a Stonington commercial fisherman and scallop farmer. He noted that the causeway created ecological and environmental problems for water circulation in the bay, and that a project that remediated those effects would be a strong candidate for funding from the National Oceanic and Atmospheric Administration.

“Don’t miss the opportunity to do remediation on the environmental damage,” he advised. “A chance like this only comes around once in a lifetime.”

Officials embraced that idea, saying that projects that ticked more boxes were more likely to be funded. And, they added, that funding might come from a combination of economic, transportation and environmental grants.

For his part, Fisher urged residents to adopt an attitude of both urgency and patience, noting that the project had a horizon of “several years.” The project isn’t even on the state’s current three-year transportation work plan, he said, but efforts like the public hearing would raise the causeway’s profile among both state and federal agencies.