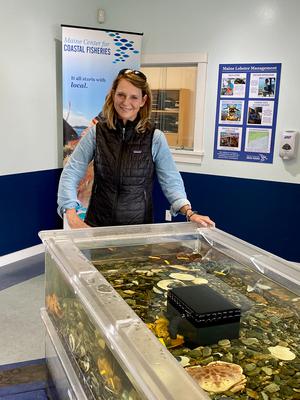 “My heart follows the sea. And that includes the people, the fish, the birds. I’m all about living in harmony and peace and togetherness,” said Alexa Dayton, new executive director of the Maine Center for Coastal Fisheries. As of Friday, September 30, Dayton will be taking the helm of the Stonington-based nonprofit that “works to secure a diversified fishing future for the communities of Eastern Maine and beyond,” according to its website.

Dayton, who holds a Ph.D. in Marine Science and Policy from the University of Maine, has been in the state since 1994. The move was precipitated by a visit in her early 20s, when she attended a concert in the Portland area—in the middle of winter no less. “I’d been living in upstate New York at the time,” she said in a recent interview at the MCCF offices, “but Maine spoke to me. It was the people. Maine was it.”

She secured a job at L.L. Bean, a company for which she worked in the hunting and fishing sector for a decade before going back to school to pursue postgraduate work. Dayton cites her time at L.L. Bean as the beginning of what she calls her love affair with the outdoors, a period that prompted her to ask questions of nature, such as “How do we protect this resource while also being able to enjoy it?”

After earning her doctorate, Dayton worked for 10 years at the Gulf of Maine Research Institute, work that resulted in extensive travel throughout the state. During that time, she became acquainted with staff and board members affiliated with MCCF. When she discovered the open executive director position this past summer, she was prompted to apply due to “the amazing staff” with whom she was already familiar.

In her new role, Dayton’s first orders of business include identifying core values and forging statewide connections. Of the former, she said, “Getting clear on your core values allows you to stay focused and to really get things done.”

Dayton believes that leadership should inspire the teams—both staff and board—to want to rise to the occasion and do their best. Before you can do that though, “you need to know where you are going,” she said. “I’ll bring a strategic perspective.”

Of getting out into other areas of the state, Dayton said, “We need to remind people that Stonington exists. MCCF has been in existence for a long time and it’s been in the background. There’s a pent-up need for more awareness. We want to tell the Stonington story outside of Stonington.”

Dayton, who is the mother of two boys and stepmother to two more—all of whom are over the age of 18—is not afraid to get her hands dirty. “I balance motherhood and work. I put up my blueberries, my wood is stacked and I’m ready to roll up my sleeves for MCCF,” she said. “I’m not afraid of winter, I’m not afraid of a challenge. And I have a good sense of humor.”