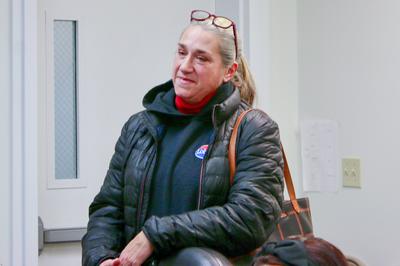 Ginny Olsen, who lobbied Congress on whale rule legislation, briefs the Stonington select board. The message, she said, was that the lobster fishing industry needed time to adapt to the new rules.

President Joe Biden on December 29 signed into law the $1.7 trillion spending bill that delays new whale rules for six years and allocates about $55 million to develop ropeless fishing gear. That money will also pay for research to figure out where, when and if the endangered Atlantic right whale is in the Gulf of Maine.

The delay comes as a big relief to Maine fishermen. They had been anticipating new rules aimed at reducing the risk to the right whale by 98 percent. Many predicted the end of lobster fishing in Maine, the loss of businesses that depend on the fishery, and the transformation of coastal Maine into a touristy collection of condos and marinas. Some Maine lobstermen have already left fishing.

Once the bill became law, the clock started ticking for lobster fishing groups, Maine’s Department of Marine Resources and congressional delegation staff. They have 180 days to come up with a plan to use real-time whale sightings to trigger temporary protections for the animals, also known as dynamic area management, according to Ginny Olsen, political liaison for the Maine Lobstering Union.

“If there’s a sighting of a whale, [the fishery] will be closed,” Olsen said.

How to spell ‘relief’

Olsen, who personally lobbied lawmakers, briefed the Stonington select board on December 21, shortly after Congress passed the spending bill.

Olsen said the key victory is getting time to write the regulation correctly and to adapt to ropeless fishing technology and dynamic area management.

One of the most significant things the law does is to encourage the National Oceanic and Atmospheric Administration to stop using worst-case scenarios in writing whale rules. Instead, the law directs NOAA to change its models of the whale population to reflect what is “most reasonably certain to occur.” NOAA’s use of the worst-case scenario led to the 98 percent risk reduction target.

“You could look at science and say a comet is going to hit the earth,” Olsen said in a phone interview. “The ‘sky is falling’ scenario isn’t going to save any whales.”

What the law does

In addition to time, the law gives money to the lobster industry and to state and federal regulators. For the next six months, affected groups—Maine Lobstermen’s Association, MLU, DMR and congressional staff—will work on a plan for how to spend it.

Olsen said a large part of the money will go to implementing dynamic area management.

Patrick Keliher, Maine Department of Marine Resources commissioner, said in a statement the law doesn’t mean the lobster industry can sit back and wait for change.

“We must actively work on gathering data, challenging the science, improving the models and developing gear that works,” he said.

Provides $26 million to states affected by the whale rule. The Atlantic States Marine Fisheries Commission will distribute the money to offset costs of compliance with the 2021 rule, or research into new gear technology and dynamic area management.

Spends $20 million on a new grant program administered by the National Fish and Wildlife Foundation for gear technology, dynamic area management and training.

Provides another $3.5 million for lobster research and gear technology.

The law also states the intention to spend even more—at least $40 million for each year until 2032—for “innovative gear deployment and technology.”

Olsen said fishermen will be able to apply directly for some of the money in the spending bill.

There will be a Lobster Advisory Council meeting on Wednesday, January 18, to update the Lobster Zone Councils on the law.

The Conservation Law Foundation denounced the new whale legislation as a trick to get around the courts and to leave the whales with weaker protections.

“Anyone who votes for this amendment has the blood of a magnificent endangered species on their hands,” said CLF senior attorney Erica Fuller in a statement.

The CLF and other groups had sued the federal government when it announced the latest round of restrictions of lobster fishing gear on August 31, 2021. The environmentalists argued it wasn’t enough to close nearly 1,000 square miles of the Gulf of Maine from October through January, require ropes fitted out with breakaways and 20-trap trawls to reduce the amount of rope in the water.

A federal judge agreed with CLF. Last July he ordered a 98 percent reduction in the risk to right whales. Later he gave the federal government two years to come up with a new rule. The spending bill adds four more years to that.

Meanwhile, the rule issued in August 2021 is still in effect.

That could change, though, if the Maine Lobstermen’s Association wins its case against the federal government. MLA is challenging the underlying scientific assumptions in the rule and seeks to get rid of it altogether. Keliher said the state is still developing its brief in the MLA lawsuit.